Traumatic Brain Injury (TBI) is a disruption in the normal function of the brain. Most are caused by a blow, bump or jolt to the head. Even a mild TBI, such as a mild concussion, can interfere with the healthy functioning of the brain’s visual pathways, causing a disruption in the way the brain and eyes communicate and a host of visual dysfunctions.

In fact, studies show that 90% of TBI patients experience some form of vision disruption, which may result in long-term, life-altering consequences, such as blurred vision, visual field loss, reading problems, among others. They may also cause the person to be identified as dyslexic or having attention deficit disorder (ADD), and may present as spatial dysfunctions affecting posture and balance.

Most brain injuries are caused by motor accidents, blasts due to explosions, falls, physical abuse, or sports-related injuries. It’s often difficult to assess the severity of the impact an injury can have on the brain, as minor head injuries may at times cause abundant cranial bleeding, while major injuries may not bleed at all. Though the initial incident may be very painful, most of the symptoms of TBI may appear sometime after the injury and not at the time of initial impact.

TBIs and related visual symptoms must be taken seriously. If you sustained even a mild head injury but feel like you have a reason for concern, consult Dr. Meg Brya, who will assess your vision and help determine the right course of treatment for your condition to prevent potential long-term damage.

How Common Are TBIs?

According to the Centers for Disease Control (CDC), an estimated 13.5 million individuals live with a disability caused by traumatic brain injury in the U.S. alone. Approximately 47% of traumatic brain injuries are caused by falls, particularly among young children, young men, and men and women over age 65. Fortunately, most TBIs (commonly called concussions), are mild.

How Does a TBI Affect Vision?

Since more areas of the brain are used to process vision than any other system, traumatic brain injuries often cause visual problems. Such injuries can disrupt the communication between the brain and the visual system and interfere with the processing of visual information, leading to blurred vision, reading difficulties, sensitivity to light, and double vision, among other symptoms.

Visual problems tend to be overlooked during the initial treatment of brain injury, especially with mild TBIs such as a concussion or whiplash. Furthermore, a regular eye exam often fails to reveal the extent to which the visual process has been affected since the vision complications that develop are not related to visual acuity (20/20), but rather to eye teaming, focusing, and tracking.

If you are experiencing post-concussion visual symptoms, there is always the risk that they will worsen over time. Some patients notice visual problems only while experiencing an additional stressor such as illness, family or work stress, or when there is a disruption to normal routines.

A Neuro-Optometric Assessment with Dr. Meg Brya can determine both the severity of the impact of a TBI on your visual system, and the treatment required for your recovery.

What Treatment Can a Neuro-Optometrist Offer?

If you’ve sustained a TBI, Dr. Meg Brya offers Neuro-Optometric Vision Rehabilitation, an individualized treatment regimen to rehabilitate the connection between the brain and the eyes and the visual system. This therapy can minimize or even eliminate TBI-related visual symptoms weeks, months, or even years after the injury.

Contact Five Points Vision Therapy Center if you have any questions, or to schedule a Neuro-Optometric Assessment. We serve patients from Athens, Augusta, Lawrenceville, and Gainesville, all throughout Georgia. 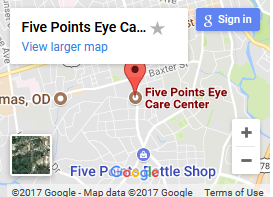