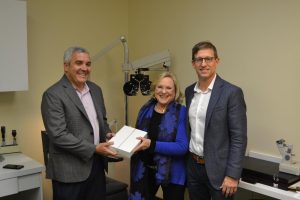 Congratulations to Dr. Jon and Ms. Middlebrooks for winning the How an Optometrist Changed My Life contest!

Leaders of the Georgia Optometric Association have announced that Ms. Carole Middlebrooks of Athens, Georgia, is the winner of the “How an Optometrist Changed My Life” 2019 contest.

Ms. Middlebrook’s winning entry described how the practice of her doctor of optometry, Dr. Jon Forche of Five Points Eye Care in Athens, pursued her in order to schedule a comprehensive eye exam. Middlebrooks, who had been recovering from treatment for something not eye related, had skipped several years of appointments and was feeling that her vision had not changed.

Forche performed a comprehensive eye exam and examined the growing nevus and recommended a retinology consult. The retinologist recommended observation. Based on that statement, Dr. Forche suggested Middlebrooks receive a second opinion with a retinal oncologist in Philadelphia.

The retinal oncologist performed the necessary surgeries that addressed the cancer and preserved the sight in her eye.

Because of the ocular melanoma, and Dr. Forche’s care, Middlebrooks adopted a new health pattern of receiving annual scans of her liver and lungs.

These annual scans led to doctors later discovering a tumor on her kidney and then, later still, a brain aneurysm.

Middlebrooks says, thanks to Dr. Forche, she was able to receive treatment before losing her vision and doctors were able to catch her other conditions early enough to prevent negative outcomes.

Running during August 2019, this was the ninth year of the annual contest that our PR agency, Curran Public Relations, uses to effectively raise consumer awareness of the profession of optometry.

Watch a video of the interview with Ms. Middlebrooks and Dr. Forche at https://www.youtube.com/watch?v=P2re1sq1YUw.